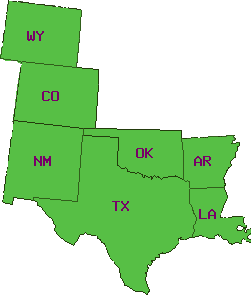 To quote Hines Poth, “It was a cold, bleak day in Fort Worth, Texas, in 1950 when five founders met with Dr. Malcom Phelps, who had been charged with the responsibility of forming BCA Division IV.” The first officers were: Dr. Malcom Phelps, president and Bulldog Club of America Councilor; Max Chenault, vice president; Ray Dickens, treasurer, and Hines Poth, secretary. The division's Board of Governors consisted of Vern Smith, F.K. Welch and Ed Winfield.

By 1954 the three specialty clubs had increased their members substantially. However, the number of BCA individual members had decreased to 24.

To quote Hines Poth in his Division Secretary’s Report, “At the meeting held in Dallas this year, 29 members and six BCA member Specialty Clubs were on the rolls, and the enthusiasm with which the members tackled the business at hand was heartwarming.”

Division IV President, J.L. (Red) Harvey passed away in 1958. He was a bulldogger supreme, and made friends wherever he went.

The 1958-59 BCA National Officers were chosen from Division IV, and Lone Star Bulldog Club hosted the 1958 National Specialty Show. The San Antonio Bulldog Club was sanctioned by AKC and held its first specialty show in October of 1958.

The first regular membership meeting of BCA Division IV in 1960-61 was held in Houston with President Nan Burke presiding. A goal was set to increase individual membership by 50 percent, and the records indicate that goal was met.

The Bulldog Club of Texas, Houston, hosted the 1960 Division IV show in conjunction with the BCA National Specialty show. The Fort Worth Bulldog Club hosted the 1961 Division IV Specialty show.
During 1962-63, Division IV continued to grow to 46 individual members. The Bulldog Club of Louisiana continued the custom it started at the 1952 National show by entertaining the exhibitors each year with an excursion ride on the Mississippi River aboard the steamer, "President." Afterward those who were interested were taken to see Bourbon Street. Anyone who attended one of these functions still remember it as one of the “fun times” they had at a dog show.

The members of the Bulldog Club of New Mexico, later named Chaparral Bulldog Club, worked diligently toward AKC sanction in 1967.

The 1966-67 division membership increased enough so that an additional Division IV councilor, Evelyn Singleton, was added. The division show was held in New Orleans in 1966, and at Arlington, Texas in 1967, 1968 and 1969. Naturally, the theme for the Texas shows was “Western Roundup” and a “boot stompin’” band at the banquet followed that theme. Members Gus and Margaret Fress were among those who danced the night away.

Bob Browne, who was elected president of Division IV in 1970-71, submitted his resignation in November 1970 because of ill health. The division's vice-president, W.H. (Dub) Irvin, assumed his position. The division membership voted to obtain and present a plaque to Browne for his devotion and many contributions to bulldogs. Since he was unable to attend because of illness, the plaque was presented to his wife, Betty, at the intermission of the 1971 BCA National Specialty Show held in Arlington, Texas.

The years of 1972-73 were unusually busy for members of the division because the BCA National officers were from Division IV.

The first item of business was to authorize publication of “The Bulldogger" magazine, the official publication of the Bulldog Club of America. Time has shown that creation of this magazine by editor Richard Maze promoted a remarkable and sustained growth of BCA's membership to nearly 3,000 members.

A “Bulldog Fiesta” was held in San Antonio in the fall of 1972. It was a “three-show” event which consisted of the BCA Division IV Specialty, San Antonio Bulldog Club specialty and the all-breed San Antonio Kennel Club show. Bulldoggers still treasure the great time they had on this show weekend.

The first BCA National in this rotation in 1973, was the first specialty show where all the net proceeds were put into the BCA treasury.

The two previous years were so hectic that the years 1974-1975 seemed rather calm and quiet. However, the division enjoyed enough growth that it was allowed a fifth Division IV national council member. The division's member clubs continued with their educational programs, shows and matches. The division officers decided to give plaques to members for finishing a champion.

The 1978 Division IV specialty show was held in Arlington, Texas, and hosted by the Fort Worth Bulldog Club. The division also grew to nine member clubs by welcoming the Austin Bulldog Club. For entertainment there was a belly dancer, who gave some of the ladies in attendance belly dancing lessons.

In 1980, the division's membership had grown enough to elect a record sixth national council member from one of the BCA's divisions. There were also two newly organized clubs, Oklahoma City Bulldog Club and Bayou Bulldog Club, bringing the total specialty clubs to 10, and eight of them were holding AKC licensed shows. Division IV continued to hold two specialties each year.

In 1982, Division IV members chose to devote their show-giving efforts to assisting with the National Specialty Show to be held in Irving, Texas. It was hosted by the Lone Star Bulldog Club. There was such a large entry that for the first time it was necessary to have two rings at the same time (one ring for dogs and one for bitches). The winner of Best of Breed was Ch. Lodel’s Hijacker of Kralan, owned by Nan Burke, a prominent Division IV member.

The highlight of 1984 was the addition of a new specialty club, Bulldog Club of Colorado Springs. The Division Specialty Show was hosted by the Fort Worth Bulldog Club. Banquet entertainment was a contest with male contestants cleverly disguised as women representing each of our member clubs with their “talent” and “good looks.”

Bulldog Club of Texas hosted the 1985 division specialty show and banquet with a band, and dancing following the banquet.

Beginning in 1986, the AKC allowed specialty clubs to hold two shows each year. Most of the clubs in the division took advantage of this by having a spring and fall show each year. Division IV membership reached 400 in 1987 making it eligible for an eighth national councilor.

During the period 1988-89 the division officers initiated a quarterly division newsletter, “The Bullhorn”. The editor, Sheryl Robinson, received the BCA's Divisional Publication Award in 1989. During this two-year period divisional meetings were moved to different areas of the division.

Bulldog Club of Texas organized the 1989 National Specialty in Houston, Texas, uniquely offering the first obedience trial and junior showmanship competition on a test basis. So popular were these alternative bulldog competitive events that future national bulldog shows have included them.

As with any history, it is a work in progress. The division has come a long way since 1950. Membership has grown from the original five to more than 400 members. It started with three specialty clubs, and now there are 10 active clubs. From reading our history you can see that there have been several creative and beneficial ideas originated by this division.

We are very proud of these accomplishments and will strive to help The Bulldog Club of America become bigger and better in the years ahead.