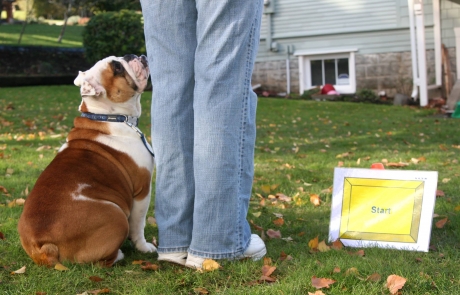 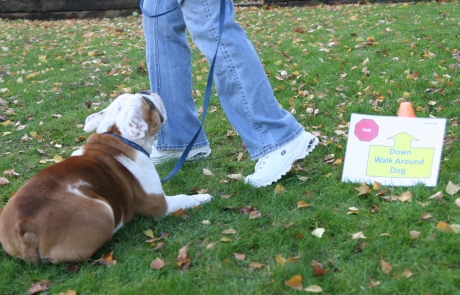 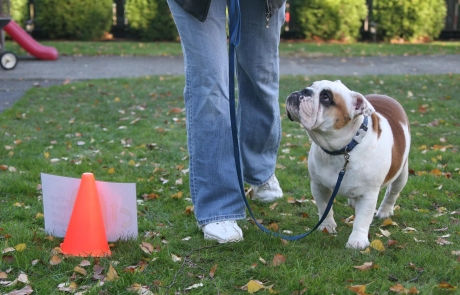 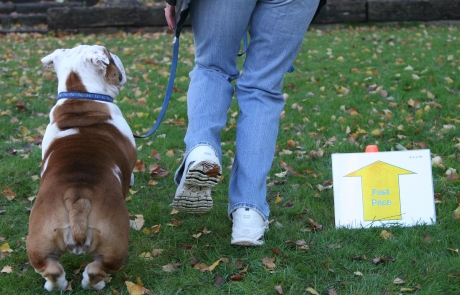 Rally is a sport in which the dog and handler complete a course that has been designed by the rally judge. The judge tells the handler to begin, and the dog and handler proceed at their own pace through a course of designated stations (10 - 20, depending on the level). Each of these stations has a sign providing instructions regarding the next skill that is to be performed. Scoring is not as rigorous as traditional obedience.

The team of dog and handler moves continuously at a brisk, but normal, pace with the dog under control at the handler's left side. There should be a sense of teamwork between the dog and handler both during the numbered exercises and between the exercise signs; however, perfect "heel position" is not required. Any faults in traditional obedience that would be evaluated and scored as a one-point deduction or more should be scored the same in Rally, unless otherwise mentioned in the Rally Regulations. After the judge's "Forward" order, the team is on its own to complete the entire sequence of numbered signs correctly.

Unlimited communication from the handler to the dog is to be encouraged and not penalized. Unless otherwise specified in these Regulations, handlers are permitted to talk, praise, encourage, clap their hands, pat their legs, or use any verbal means of encouragement. Multiple commands and/or signals using one or both arms and hands are allowed; the handler's arms need not be maintained in any particular position at any time. The handler may not touch the dog or make physical corrections. At any time during the performance, loud or harsh commands or intimidating signals will be penalized.

Rally provides a link from the Canine Good Citizen® (CGC) program to obedience or agility competition, both for dogs and handlers. In addition, rally promotes fun and enjoyment for dogs at all levels of competition.

Many AKC clubs conduct a variety of classes, instructed by experienced trainers who have earned titles and awards in obedience competitions with their own dogs. These people are up-to-date on the latest training techniques. They have experience training different breeds of dogs, mixed breeds and purebreds, and prospective students are usually welcome to observe a class before signing up for a training course.
When you attend a class with your dog, instructors will show you how to train your dog and will expect you to practice at home. The younger the dog, the shorter the practice sessions should be. For the best results, both you and your dog should enjoy frequent short sessions, combined with some play and rewards.
To find AKC clubs in your area that offer training, please visit AKC's Training Resources section.

AKC Rally is the new dog sport that is taking the nation by storm, a successful stepping stone from the AKC Canine Good Citizen® program to the world of obedience or agility. Rally offers both the dogs and handlers an experience that is fun and energizing. The canine team moves at their own pace, very similar to rally-style auto racing. Rally was designed with the traditional pet owner in mind, but it can still be very challenging for those who enjoy higher levels of competition.

A rally course includes 10 to 20 stations, depending on the level. Scoring is not as rigorous as traditional obedience. Communication between handler and dog is encouraged and perfect heel position is not required, but there should be a sense of teamwork between the dog and handler. The main objective of rally is to produce dogs that have been trained to behave in the home, in public places, and in the presence of other dogs, in a manner that will reflect positively on the sport of rally at all times and under all conditions.

The official announcement of a club's event is called a premium list. It contains all relevant information regarding the trial, including date, location, classes offered, and judges – as well as an entry form. To enter a rally trial, the owner of the dog must submit an official AKC entry form, which can be found in the premium list or on the AKC website. The entry form should be sent to the trial secretary or superintendent of the trial. You may find rally trials in the AKC Event and Results Search. After the entries have closed, a program showing the schedule for the judging of each class will be mailed to you along with all relevant information about the trial.

The signs may be any color and they include descriptions as well as directional arrows of exercises. Signs are numbered to make it easy to find the next station when navigating the course.

All signs are placed to the handler's right side. The signs are large enough to be easily recognized when going through a course. The exercises designated on the signs will be performed in close proximity to the sign itself, either in front, back of, or beside the sign.

The judge must arrive one hour before judging in order to set up the course for the class. Judges are open to questions that the handlers may have regarding the course during the walk-through period.They must post a copy of the course at ringside so that the exhibitors know what to expect and where to go once they are in the ring. The judge must evaluate the performance of each exercise and the sense of teamwork between the dog and handler between the stations as stated in the AKC Rally Regulations.

The orders "Are you ready?" and "Forward" are given to each handler who enters the ring.

A qualifying performance indicates that the dog has performed the required exercises according to the AKC Rally Regulations. Each performance is timed, but times are only counted if two dogs earn the same score.

All dogs and handlers begin with a perfect 100. A dog and handler team is awarded a qualifying score if it retains at least 70 points after the course has been completed. Once the team has completed the course, their score will be posted ringside.

The dogs must earn three qualifying scores under two different judges in order to receive a rally title. The titles that can be earned are:

The requirement for the RAE title is that the dog must qualify ten times in both the Advanced B class and the Excellent B class at the same trial.