If you definitely want a puppy or are considering a retired show dog, you should consider getting one from a breeder who is a member of BCA and adheres to the BCA Breeder Code of Ethics.  If you are looking for an older dog in need of a home and a loving family, consider contacting the Bulldog Club of America Rescue Network (BCARN).  More detailed information on both approaches can be found Below.

Generally, breeders will offer puppies for sale between eight and twelve weeks of age.  Others sell puppies between 12 and 16 weeks, after it has had its full course of puppy shots.  This reduces the chance it will pick up some illness soon after it leaves the breeder. Much before eight weeks, it is too early to separate the puppy from its mother (and it may be illegal to sell puppies that age in some states); by 12-16 weeks, the breeders have good guesses about which puppies may be able to get a championship (although they may hold onto a potential show prospect for up to a year to see if it turns out).

Sometimes older dogs held onto for their show potential are available as older puppies.  Depending on your situation, considering them may be advantageous since you can better see how they will look and they will probably be housebroken already.  The decision on whether a dog is a potential show puppy is based the breeder's judgment of the degree to which the puppy will match the Bulldog STANDARD as it matures and the breeder's knowledge about the maturation of the lines he or she breeds.

Changes to the puppy occur throughout maturation and affect the degree to which he meets the Bulldog Standard in any one area.  The breeder's decision that a puppy does not have show potential only means that the breeder believes the puppy will not closely match the Bulldog Standard when it matures.  It does not mean the puppy is unhealthy or otherwise unsuited to bringing you many years of friendship and happiness.   Although it may mean a great deal to a breeder whether ears are too large or the topline is perfect, it will probably not make much difference to you or your puppy.  Since no one's judgment is perfect, a dog that the breeder thinks is a show prospect may not turn out to be one when it matures.  Similarly, every breeder has a story about the pet he or she sold that they would die to get back because the puppy turned out to match the Bulldog Standard better than other dogs that breeder kept. 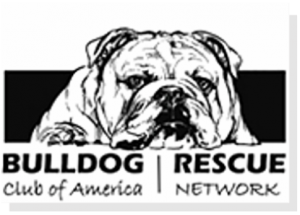 Dogs enter rescue for a variety of reasons.  Some owners are less than responsible and give up their dogs for reasons many of us would find troubling.  Dog have been placed in rescue because the owners lost them and didn't try to find them, their shedding conflicted with the new furniture colors, the dogs were older and no longer fit into the active life of the family, or the family changed (through divorce or the addition of children) and the dogs no longer were able to be cared for.  Of course, some were abused by their owners.

Responsible breeders will generally take back dogs they bred if their families can't keep them.  However, not all Bulldogs are bred by the responsible members of the BCA Breeder Referral Program, so dogs may wind up with a rescue group.  BCA set up a separate 501(c)(3) non-profit organization to address the needs of these dogs in need. The dedicated members of this group take dogs in need, address any health or emotional issues they have and then look for new homes for them.