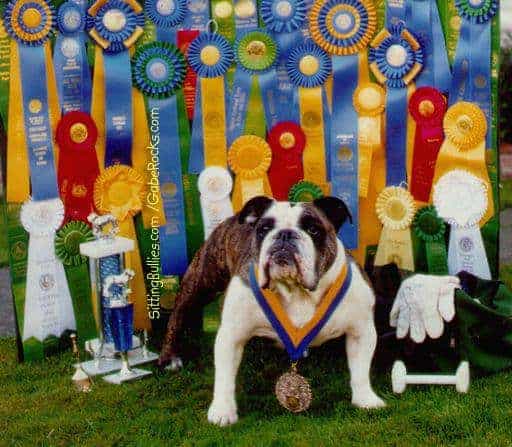 For your dog to compete in obedience, a dog must be registered with the AKC or come under one of the approved exceptions. Dogs with a PAL (Purebred Alternative Listing), ILP (Indefinite Listing Privilege), or AKC Canine Partners number must be spayed or neutered in order to compete. Bitches are not permitted to compete when they are in season. AKC Obedience Regulations can be downloaded from the AKC in PDF format.

Your dog will be rated on each exercise against a total of 200 possible points for a perfect exercise. Points may also be lost for errors made by the handler (like repeating commands).

In addition to technical perfection, his attitude performing the exercises counts in the score. To earn the Companion Dog Title (C.D.), he must pass each exercise with a score of 50 percent of the points in that exercise and earn a total of 170 points to obtain the Companion Dog (C.D.) title in three shows under three different judges. In addition, there are optional Beginner and Graduate Novice classes, Graduate Open Classes, and Versatility classes that may be offered at the option of clubs.

Unlike conformation where there are only the titles of Champion and Grand Champion to be earned, in Obedience you dog can obtain several titles based on the degree of difficulty of activities undertaken. When a judge gives a dog a qualifying score he or she is certifying to The American Kennel Club that the dog on this particular occasion has performed all of the required exercises at least in accordance with the minimum standards and that its performance that day justifies the awarding of the obedience title associated with the particular class. A Qualifying score must never be awarded to a dog whose performance has not met the minimum requirements, nor to a dog that shows fear or resentment, or that relieves itself at any time while in the ring for judging, nor to a dog whose handler disciplines it or abuses it in the ring, or carries or offers food in the ring.

The Judge must mentally picture the theoretically perfect performance in each exercise and score each dog and handler against that standard. The standard shall combine the utmost in willingness, enjoyment and precision on the part of the dog, and naturalness, gentleness, and smoothness in handling. Speed is not to be considered as the equivalent to willingness and enjoyment. Lack of willingness or enjoyment on the part of the dog must be penalized, as must lack of precision in the dog's performance, roughness in handling, military precision or peremptory commands by the handler.

How an Obedience Trial Works

Just as in the Novice class, there are several exercises required and you must have a passing score and a total of 170 points out of 200 possible points to get one of the three required legs towards the title. There are also separate competition for dogs who have not yet earned a Companion Dog Excellent (C.D.X.) title and those who have already been awarded the title. The exercises, and points for each, are:

Just as in the Novice and Open classes, there are several exercises required and you must have a passing score and a total of 170 points out of 200 possible points to get one of the three required legs towards the title. There are also separate competition for dogs who have not yet earned a Utility Dog (U.D.) title and those who have already been awarded the title. The exercises, and points for each, are:

The Utility Dog Excellent (U.D.X.) title may be won by dogs that have achieved a U.D. Title. To earn a U.D.X. title, the dog must get qualifying scores in both Open B and Utility B at 10 separate events.

To acquire an Obedience Master title, dogs will be required to earn a total
of 200 points, based on the points awarded for scores of 190 or better from the Open B or Utility B classes as listed in the below point schedule.

Points awarded are based on the level of the qualifying score. A dog may earn between 6 and 15 points per event. When a dog earns a total of 200 points, it will be awarded an Obedience Master title.

#yestheycan#nochangeLet’s see how many shares we can get!!

Posted by The Bulldog Club of America on Thursday, June 13, 2019